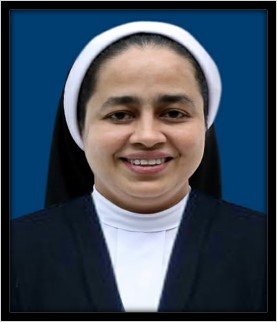 Dr. Reena Ittyachan (Sr. Irene) was born on 29th Dec.1971 at Mekkad a small village in Nedumbassery Panchayat, Ernakulam District, Kerala. Her father Dr. K. C. Ittyachan Pattarumadom and mother Rosamma Ittyachan encouraged her in her studies. She did her schooling from Nirmala English Medium High School Aluva, Ernakulam District, Kerala and completed her Pre-Degree at Sacred Heart College, Chalakudy. She obtained her Bachelor’s Degree from M.G. University through Bharat Mata College, Kochi. She obtained her Master’s Degree in Physics from University of Madras, through Loyola College, Chennai. After undergoing the religious training she became a member of Franciscan Clarist Congregation (FCC), Alvernia Province, Irinjalakuda, Kerala in the year 1999. She took her M. Phil Degree ( Master of Philosophy in Physics) from Loyola College, University of Madras in the year 2000. She was the Gold Medalist for the same. She obtained Ph. D from University of Madras through Loyola College in the year 2004. She carried out research in semiorganic nonlinear optical amino acid crystals ,which have applications in laser technology, opto-electronics etc. She had 10 international publications with good impact factor and recently she published 2 papers in international journals. She presented papers in many National and International conferences. Recently she presented her paper in European Conference on Crystal Growth at Bologna, Italy. She was selected for the International Travel Grant for the same from University Grants Commission (UGC). She guided many students in many research activities. She started her career as Assistant Professor in Physics, Sacred Heart College, Chalakudy in the year 2007. She was the College Hostel Warden for past 3 years. She is a Life Member of Academy of Physics Teachers, Kerala and Life Member of Indian Association of Crystal Growth. Now she took charge as Principal-in-charge, Sacred Heart College, Chalakudy.

Positions Held in the College